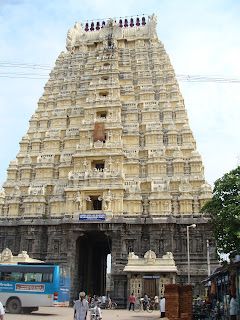 If one is inquisitive and on a rediscovery trail on India, one is bound to ponder over the legacy of  various kingdoms of the past.  Where did the Pallavan kings live, how did they manage to build huge monuments, what was the motivation to undertake massive architectural excellence, why did they engage in constant warfare among the Gangas and Chalukyas. 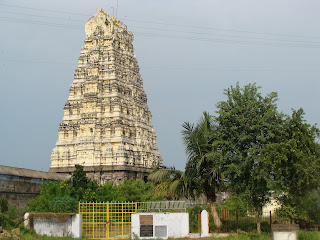 During my trip i asked my guide from TTDC Ramesh can you just explain my queries on the above elaborated subject matter.  He was just taken back initially and managed to put the onus on research by ASI and department of tourism in TN.  Probably if a systematic research is undertaken one might find the ruined or destroyed palace of the kings and maybe a hidden chamber of wealth which was amassed by the Pallavan kings.

Kolar gold fields were probably first discovered during the Harappan and Mohejadaro period with Golden objects tracing back to gold impurity levels of 11% silver concentration which is present in Kolar Gold fields only.  Guptas ( 320 - 550 AD ) discovered the Golden reserves and consolidated their claim by deploying the Ganga dynasty rulers as their feudatory Konganivarman Madhava ( 350-370 AD)  and claimed royalty in the form of gold.  Samudragupta ( 335-375 AD) had first issued series of gold coins depicting various facets of  his lifetime, Ashwamedha yagna, Lyrist, Hunter, Warrior, Royalty and Chess player. Durvinita ( 529 - 579 ) became a powerful ruler of  Ganga based at Talakkad, Avani served as a strategic base which was close to Kanchipuram the Pallavan capital.  Durvinita forged  alliance with the Chalukyas by marrying his daughter to Chalukyan emperors son Vijayaditya. Pallavas constantly waged war because of the huge gold mine at Kolar with Gangas and Chalukyas and ultimately managed to defeat Pulakesin II in 642 AD and occupied Badami too for almost 13 years.  Now the source of  wealth of  Pallavas is identified, now let us check out the famous edifices in Kanchipuram : 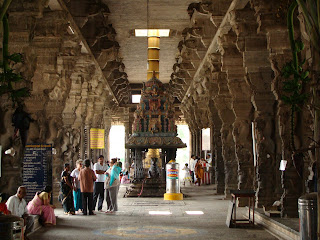 Ekambareswar Temple :   This temple has been built under different kingdoms starting with Pallavas, Cholas and finally with Vijaynagar emperor Krishnadevaraya building the massive entrance gopuram ( tower ) which raises to a height of 57 meters.  This temple is dedicated to Lord Shiva and his consort Parvathi.  The shivlinga is made out of sand and shaped almost like a triangular pyramid unlike the circular Shivlingam.  The initial temple construction can be credited to Parameswarvarman ( 672 - 700 AD ) as a mark of  his association with monument building.  The temple complex is spread over 23 acres currently with three distinct complexes and a tank complex.  There is a small courtyard with a 3000 year old mango tree wherein devotees circulating pray for their wishes to come true.  One also ties knot of the ribbon with priest prompting to seek the divine blessing.   My wife liberally donated Rs 100 to the priest who was extremely pleased to pray for our welfare. 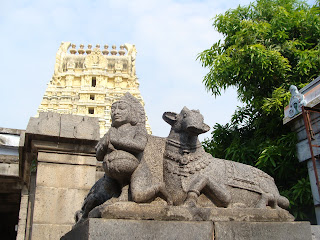 On a packaged trip the guide literally prods us to return to the bus as early as possible.  Maybe next time it would be wise for us to make an unguided tour of this huge premises.  There is a small temple just opposite this huge complex which is impressive but it is attached to some other mutt. It has obviously been resurrected with the original stones.  The main temple has been painted indiscriminately, and too much of  religious commercial activity in the temple premises robs the visitors of its glory, wherever we find Pooja being performed in ancient  temple looses its charm according to me.  The entire complex is divided among priests as if it is their legacy.  We may come across property dispute among caretaker priests,  I am afraid, in future if such practise are allowed to continue..  I hope the state govt and ASI is alert to such danger.

Email ThisBlogThis!Share to TwitterShare to FacebookShare to Pinterest
Labels: Kanchi

I am lucky to have a French family connection with my sister having married Jacques a French citizen.  Going back to the roots of the French connection in India, could we have enjoyed better freedom and progress under their reign is quite debatable.  The genesis of  Pondicherry dates back to port trading days with the Romans with the discovery of Artifacts at Arikamedu.  It was known as Poduke in ancient times among the historians. 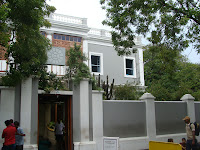 Sometime in 1985 when i visited Pondicherry for launch of a confectionery product. I distinctly remember sipping beer on the balcony of  a reputed resort on the seashore.  It was full moon night waves were literally lashing the beach front.  It was a heady and refreshing feeling, after a full day labour in the market place, gulping down mug after mug, with my colleague who was chomping away chicken kabbabs and other bites. 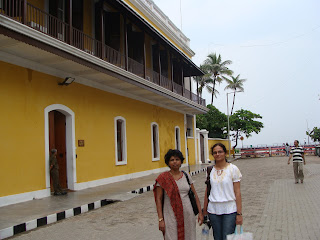 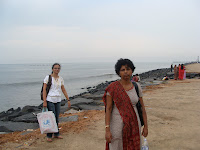 One of the fine ways of exploring Pondicherry is obviously undertaking a heritage walk in the alleys of this ancient French colony (  Portuguese landed earlier and started colonising but incurred the wrath of Gingee ruler and were expelled )  Dutch established their base in Fort David in Cuddalore.  We undertook the walk by default, from Aurobindo Ashram pass the French consulate, and on to the beach front.

The beach front is fully spruced up with wide footpath for almost 4 kms stretch, which soothing change from the past.  Earlier the beach front was filled only with rocky stones preventing the sea erosion.  Now I find that an elevated pathway has been created for tourists to walk around.  The pathway leads to famous landmark of Pondicherry, Mahatma Gandhi statue. What a coincidence we were almost there on Gandhi Jayanthi ( 3rd Oct 2011) 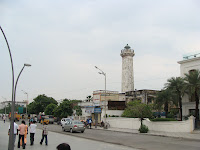 Just a few meters away from the Mahatma Gandhi statue there is a coffee shop, the only restaurant on the beach front.  We were literally lured into the cafe with a signage of  buffet lunch @ Rs 99, the waiter clarified it is only on weekends, which may just a gimmick to lure customers.  Anand Bhavan offers a lovely limited veg luuncheon @ Rs 65.

A few metres away from the beach front cafe is Pondicherry tourism office, wherein we bumped in and booked our half a sight seeing package.  We were misguided on the phone that they don t operate full day sightseeing, on weekends they definitely operate full day sight seeing.  The package includes lunch @ Rs 200 currently ( Oct 2011)  and half a day package is quoted @ Rs 100 per pax.  The package includes all major sightseeing points in Pondicherry including Auroville.  We undertook our Pondy visit with Chennai as a base, next time around i intend to stay at Auroville and seek a different perspective. 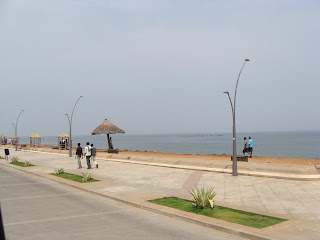 Pondicherry is haven for revellers with subsidised booze available in liquor stores.  This time around i did not venture into drinking or buying cheap liquor because it was purely a family trip.  The heat was searing, on the hindsight it was a wise decision.  Since there is a heavy excise checking on all vehicles coming from Pondi to Chennai en route and secondly it would aggravated the dehydration suffered because of  heat.  Next time around i would definitely prefer to stay at Pondi and enjoy the rustic and tranquil beauty.