I had learnt that Nijagal was literally a fierce battleground for the raiding Marathas alongwith the support of  Madakari Nayak defeated Hyder Ali's army in 1777.  We wanted to cover this massive fortress located adjacent to NH4 on the return, but with the day light fading rapidly we had to compromise with visiting the Veerbhadra temple which is situated at the ground level of the Fortress. 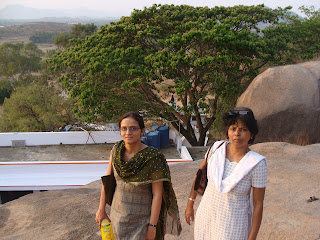 Brief History :  The Nijagal fortress appears to have been built by feudatory of  the Vijaynagar Empire, later captured by Hyder Ali and strengthened to withstand the enemy assault.  The fortress was well endowed with multiple layers of security, moats filled with crocodiles, and granary which had a capacity to store food grains for two years.  Sardar khan was appointed as the general to protect the territory under Nijagal fortress by Hyder Ali.  He had garnered sufficient revenue and secured his loot inside the fortress.  How the fortress was captured will be a matter to be discussed in the later post. 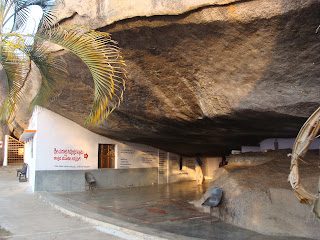 Location : Hale Nijagal is the right description of the fortress on NH4, which is approximately 60 km away from Bangalore.  One will find the Kamat Restaurant on the left towards Tumkur and the fortress is visible right in front across the railway line, but one has to travel further and cross the under bridge at Old Nijagal to reach the Veerabhadra temple. 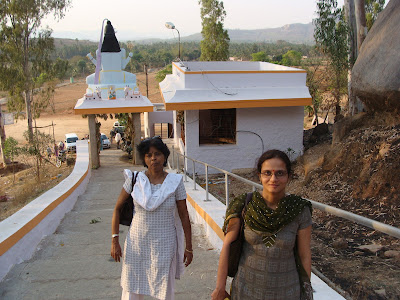 One can park their vehicle at the bottom of the hillock and ascend around 100 steps to reach the temple premises.  A Shiv Linga is installed inside a cavern wherein one can seek blessing of the Lord.  Than proceed towards monolithic Veerabhadra ( son of  Shiva ) carved out of the rock face.  The priests do conduct prayers for the devotees well being with right earnest.  It is soothing prayer one may find repetitive,
but bearable. 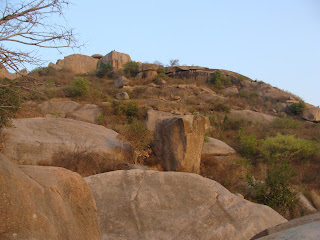 After completing the dharsan at both the temples one can take a hike towards the rocky pedestal on which Nandi is housed.  The scenery from this vantage point is quite pleasing.  One can have a sneak perview of the fortress too.  But the coverage of the fortress is kept pending for another day.  It was almost 7 pm and light was fading, we rushed to the Reliance Bangera foodcourt and had dosas and than proceeded back to the pavilion. 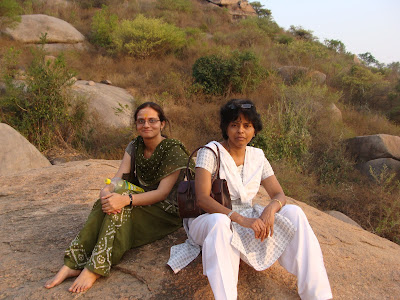 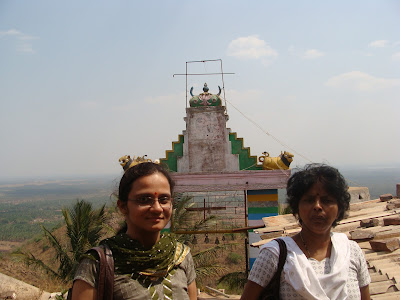 We were returning after visiting Choudeswari temple tiptur, suddenly on the right we found an arch mentioning Lakshminarasimha temple. My wife suggested we take a detour and explore this unknown destination.   The road leading to the hillock was well laid, so it literally tempted us to take a chance and check out.  Suddenly we found the road gradient was almost 45% degree angle.  A vehicle with bald tyre would definitely skid down hill because some portions are cement road.  It is better to park a little distant away considering there is hardly space for 4 vehicles to be parked on the hillock.  Weak hearted drivers may find this a challenging barrier to cross over.  It is better to carry stones inside car to stop the skidding if it happens.  Driving on first gear is the only way to ascend. 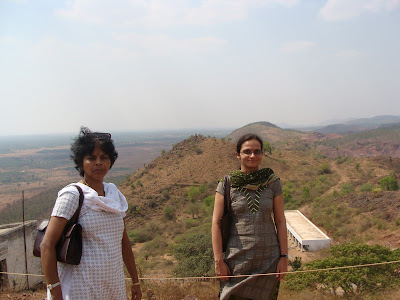 The exact location of the this temple is approximately 120 kms from Bangalore, via Tumkur on the state highway leading towards Tiptur.  The temple is hardly 8 kms away from Nittur town.  On the return journey it is located 20km away from Tiptur towards Tumkur. 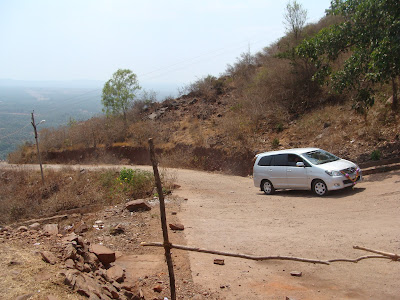 Despite SC & HC order illegal mining continues to thrive around this area.  I hope the vigilante from the forest department are pro active to stop such mining.  The panoramic view from the hillock gives one the idea how much illegal mining has spread its wing. 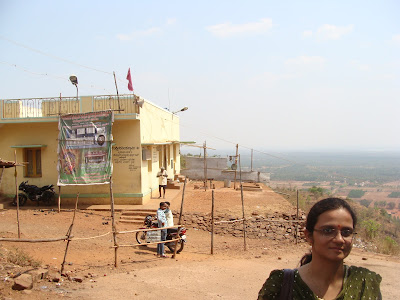 The temple is under re-construction.  The ancient architecture is difficult to replicate.  Meanwhile the Yoganarasimha statue etc have been relocated to a makeshift temple below.  Looking at the temple arch it looks as if the temple is built during the reign of the wodeyars with brick stone.  One can hazard a guess that the temple must have been constructed around early 1800's after the fall of  Tipu sultan.

Overall it is worth spending 1 hour in this temple premise praying to the goddess Lakshmi and having a panoramic view of the surroundings.  It is better to visit the temple in the monsoon and winter season, the summer month heat is searing and with mining fields, it adds to the hot atmosphere.

It is one offbeat destination one can cherish being with nature and heritage trail.  There are no trails on the net regarding this destination.  We took off from Bangalore towards Hassan on a Swift ( 23/3/2012 ) enroute we dropped in at Shravanabelgola.  After lunch we took a steep ascent of 626 steps to reach the historic Gommateswara statue on Vindyagiri hillock.  Even though it was summer the evening climb was not so tiring, thanks to the cloudy weather and increased fitness levels.  After seeking the blessings of  the Lord we proceeded towards Sakleshpur town via the Hassan bye pass.  After 4 kms on NH47 at Sakleshpur,  a right turn leads towards Hanbal village and from there we proceeded towards the resort Hills, which around 8 kms. The total distance from Bangalore is 260 kms.  We were pleasantly surprised by the serene forest type of atmosphere in the resort.  After having a nice tasty buffet dinner, we hit the deck in our elevated
wooden Indonesian cottage

After a nice hot water bath we dressed up for a trek to Pandavara Betta.  This is located 7 kms away from the resort where we stayed.  The road is rugged in patches till one reaches the destination of  Betta Bhaireswar temple.  The road is steep in pockets and requires a special driving skill lest the vehicle stalls.  It is better to travel in first gear on this steep hillock route.  One needs to park the vehicle at the Betta Bhaireshwar temple complex and take a trek of a kilometre to reach the Pandavara Betta.  It is speculated that Pandavas during their exile spent some time in the forest surroundings.  The view point from the peak covers the beautiful western ghat consisting of  Bisle ghat, Chikmangalur and Shiradi Ghat.  The trek transgressing the two hillocks takes around half a hour with good fitness levels.  After clicking photographs we returned to Betta Bhaireswar temple.

Betta Bhaireswar temple seems to have been built during the Vijaynagar times by local chieftain.  The temple is dedicated to Lord Shiva during his fiery avataar.  Since the temple was originally located in the forest atmosphere it seems to have lost it sheen.  We can safely speculate that people around the region used to sacrifice chicken, goat etc to the Lord, to gain his blessings.  There is a separate enclosure for the serpent goddess too.  This temple has been renovated by the tourism department after its long neglect.  It has been handed over to a priest family, who was nowhere to be seen.  The dept. would do the tourist a favour by at least displaying the priests cell number on the gate or door.  There is neatly built toilet facility for the tourist to freshen up.  Eventually I am sure some sort of accommodation for priest in the vicinity of the temple will be in place citing tourist inconvenience.

During monsoon the entire environs maybe more welcoming but trekking up the hillock may be a little risky.  Tourists can cover this destination from Mudigere which is connecting point for Chickmaglur, Hornadu, Sringeri or Belur.  It is worth spending a night in forest like environs and be with nature.

Travelling down the memory lane, my encounter with Horsley Hills was in Mid Eighties.  I remember we travelled from Chittoor one saturday evening to play cricket match at the famous Rishi Valley School.  We had M L Jaisimha in our team playing for Nutrine against the school team.  I remember i opened the innings against the school and managed to score 20 odd runs and in came the Lion and scored a blistering 60 odd runs.  We managed to set up a total of more than 200 odd runs which the school team fell short by 20 odd runs.  It was a wonderful feeling staying in the school hostel and experiencing the cool atmosphere at the hill station.  We celebrated victory on the way back since we restricted from having liquor in the school premises.

This time around after visiting Kadri temple we quickly rushed to Marimaru baniyan tree and than moved towards Horsley Hills.  The location is named after the collectorate W.D Horsley who was the collector of Cuddapah district during the British rule.  He visited this location in 1840 and was charmed by the environs and he ordered for building a summer residence, which is currently serving as Governor's Bunglow.  The AP tourism has built a number of cottages and rest houses in the premium category.  A double room is minimum Rs 2200 per head.

The beauty of this hill station is that it is maintained with a pristine condition which is not found anywhere in India as per my knowledge.  There are not many commercial establishments in this hill station.  I hope it remains so with pressure for commercial exploitation.  It is located 1290 meters above sea level.

Tourist Attraction :  One of the major tourist attraction is the winding drive upto the peak amidst eucalyptus  and gulmohar trees.  Environmental park is located in a separate complex, which has enclosure for few birds, and rabbits.  Adventure sports such as trekking and rapelling is conducted by the department.  A good swimming pool complex is located wherein a air ballon can used to roll across the waters. Apart from this there is lake and museum to add to the tourist attraction.

If one wants to live with nature in peace for a day Horsley hills is highly recommended.  It can be treated as one day getaway from Bangalore too.