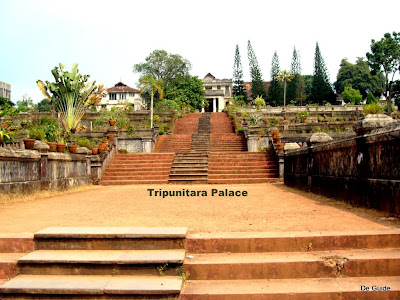 Many a times tourist to Kochi would get confusing answers if one asks about Tripunitara Palace. The best way to get around is to enquire about Tripunitara Museum which is away from the township of Tripunitara. This place is situated enroute to the famous temple of Chottinakara ( 6 km before the temple )

This palace is purported to be built on the hillock which is not very prominent in 1865 by the Kochi King Rama Varma ( 1864 – 1888 ) who completed the work begun by uncle Ravi Varma ( 1853 – 1864 ). A brief history of the Kochi kingdom would not be out of place to understand the lineage of the Kochi Kings.

According to keralamahatmyam ( 44th chapter ) King Vishravanas daughter Bala prayed to Parusurama and wished that a land should be created in her name. In keeping with her wish Lord Parusurama created a land out of the sea bed and called it Kochi. ( which later became Cochin ) There is another well known story that the last Perumal who reigned Kerala divided his kingdom among his nephews and sons and got himself converted to Islam and went to Mecca on a piligrimage. Keralopathi states “ The last famous Perumal King Cheraman Perumal ruled kerala for 36 years. He left for Mecca by ship with some muslims who arrived at Cragannore port and converted into Islam. Before leaving for Mecca he divided his kingdom among his nephews and sons “. The lineage of the Kochi kings is traced to Surya-chandra vamsha as per puranas.


During the 12th century Vanneri was the capital of the kings. Than the focus shifted to Crangnnore, present day Kodganallur since the maritime trade with the Arab world flourished. The Zamorins attacked this place and took possession forcing the kings to move towards Kochi and Tripunithara. In 1341 AD a massive flood wiped out Crangannore and the port was relocated in Kochi. It also created an isle of Vypin.

In 1555 the dutch palace at Mattancheri was built by the Portuguese and presented to the King Veera Kerala Varma ( 1537 – 1565 ) and later some extension and renovations were carried out by the Dutch in 1663 AD. The capital was shifted to Trichur for a long time. In the beginning of the 18th century Tripunithara started gaining prominence due to the constant fighting between the Zamorin, British and Portuguese. Around 1755 Thampuram family left Vellarapalli and settled in tripunithara. Thus it became the capital of the Kochi Kings and the palace was built in 1865.

The palace is housed in a terrain of 54 acres presently but in the past it must have encompassed a much larger area. The palace was taken over the by Kerala govt after independence and handed over to ASI in 1980 AD. It was converted into a museum in 1986 AD and thrown open to public. A famous Malayalam movie Manichitrathazhu was shot in this premise. 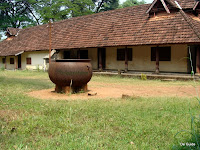 Currently the palace is under renovation ( 22/10/09 ) when we visited we found that the visit to the museum is banned due to renovation efforts. It is surprising the entire premises consisting of 3 enclosures is closed, which seems to be wrong planning. They could have closed one and left open the other two for public viewing. Further even after plenty of rainfall the landscaping was not undertaken, many of the plants looked dried up, which obviously points to the fact that proper manure or fertilizers are not being used to upkeep the gardens.

The heritage look of the palace is not present and a dull ghostly look is prevalent. There is a graveyard of Pareekshit Thamuran ( 1876- 1964 AD ) housed within the premises. Many of the buildings have not been occupied and it is strange that upkeep too has not taken place despite being under ASI for nearly 30 years. There is a heritage centre wherein the ASI office is located and a mural restoration school and conservation centre is housed in another enclosure. These areas are restricted to the public.

The palace is constructed with Mangalore tiled roof to prevent the effects of heavy rainfall. The central citadel consists of first floor with a beautifully carved wooden staircase leading to upstairs. The palace must be filled with antiques which we could not see, there was one elephant statue in wooden which was covered with plastic sheets and a wooden cot in one of the rooms. 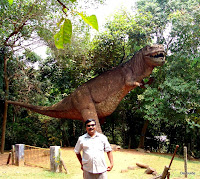 The palace landscaping is built on three stepped enclosures with a road leading upto the palace, which seems to have been modified according to the British style. The steps leading from the enterance upto the palace is quite unique. There is a deer park behind the palace. A beautiful dinosaurs is carved in wood and installed to the left of the palace.

Enclosure near the dear park looks to be horse stable where the horses may have been housed along with a small pond located adjescent to this place. There are other places which are restricted and kept under lock and key. They may be definitely housing the antiques in view of the renovation work.

At the enterance there is another huge pond which may be harvesting the rain water for usage of common public and the staff of the palace. There are number of shade providing trees and a few flowering plants in the premises. Two water fountains in a ruinous state is found. For some time the british seems to have occupied this palace, because the fountain concept is purely a british legacy. The statue adorning the fountain seems to be some English character. There is grave yard of one of the kings within the premises. 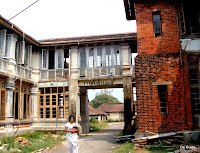 Entrance ticket of Rs 10 per head is charged along with Rs 25 for still camera, which seems strange even when the palace museum is closed. The worst part is that a premium is charged on the books sold by the Dept of Archaeology. Normally such books should not cost beyond Rs 100 to Rs 150, considering that gods own country is expensive, it is priced at Rs 300/- and the staff add their own commission by charging Rs 50 above the MRP. It is better they streamline their act and instruct the staff not to blackmarket the books of heritage to the tourist.

Overall a visit to Tripunithara palace reveal the recent heritage almost just covering 150 years. Once the renovation is complete we might get to see its glory. Obviously photography is not allowed inside the museum. We hope to have a glimpse of the same through their books in the coming years. It gives me an impression that the royalty were a puppet king mostly under sovereignty of the Dutch, Zamorins and the British.
Posted by Deguide at 9:09 AM 5 comments: