Mulki started loosing its historical importance from the days steamer stopped visiting the port town, after the construction of a road bridge across the river Sambhavi in 1960 on NH 17 ( 66 ) its decline was rapid.  The old port town will get further alienated with the second bridge coming up on the river as part of road widening and four lane tolled road initiative.   My quest for going into the roots of Mulki is not because it is not being bestowed a taluk status, but because of its ancient heritage lost in the pages of history, even if one googles the same one cannot find its roots, so one has to visit the spot and get to know its legacy.

In my quest to trace its ancient root i happened to visit Bola Madhava Rao and his family, whose house is located close to Vijaya college mulki.   He welcomed me with an open heart when he came to know that i was planning to photograph and publish something interesting facts about Mulki.   One cursory glance at the bunglow reveals that it is of ancient pedigree.   His house was probably constructed in 1870's by his great grandfather who was a merchant and elderly gentlemen who used to sometimes dispense justice to the people.  The verandah was the exact place where he was seated as a judge and used to deliver justice.

This verandah is the exact spot wherein Bola's grandfather used to deliver his justice and spend time with the public from the nearby villages.   The entire house is built with a strong foundation and construction material mainly consisting of burma teak, Belgium glazed tiles, Pillar structure, Brass rods, Red oxide flooring, and many other ancient construction materials.   The stained glass and tiled roof is also from olden times. 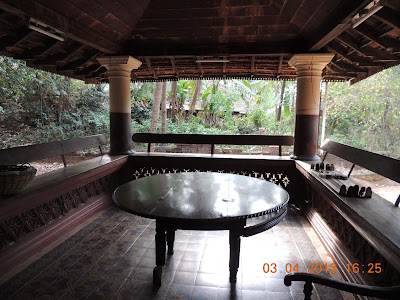 I innocently enquired where are the old artefacts and collections, Mr Bola ( in kannada interesting his name signifies innocence ) replied that he has gifted many of the articles to his relatives, nephews and nieces during their visit and marriages. 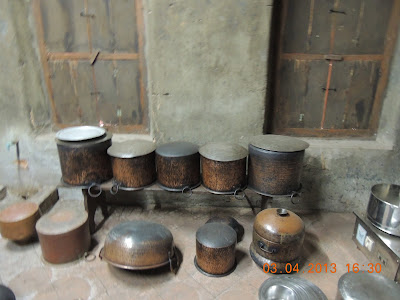 Presently Bhola and his family is left behind with minimum of ancient vessels meant for cooking and the basic structure with its construction materials intact.   One can see the stained glasses intact on the balcony of the house. 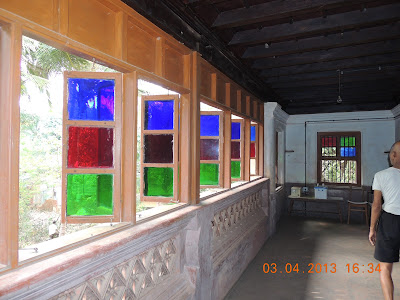 I was wondering how the old couple was maintaining themselves, and felt pity for their existence, his cousin seems to have joined them for company sake.   I was in for a shock the next day when he beckoned me in style. 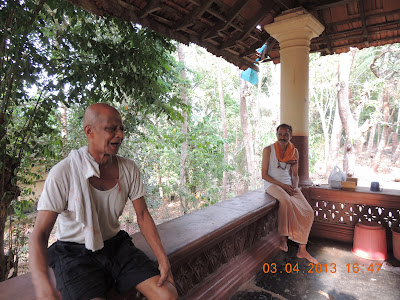 The Mr Bola with shades on recognised me with my cousin Mahesh on a discovery trip of the old Mulki port town.   Surprise of surprise majority of the property in the port town is owned my Mr Bola and his family members.   He earns his residual income from leasing out his property and obtaining the yield of coconut and mangoes in his property. 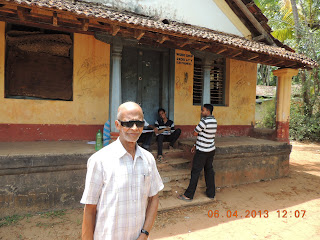 Some of the buildings were leased out to Punja and Pais who running ITI and other educational institution after these propeties ceased to be wearhouses for importing Rice, Kerosene by Burmah Shell, Burma teak, etc 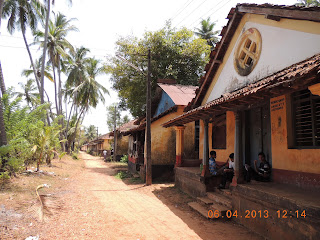 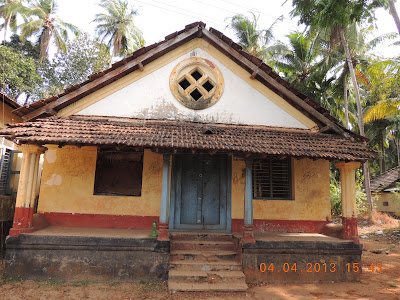 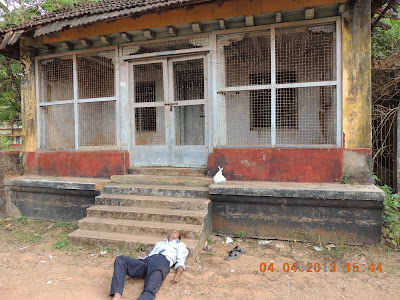 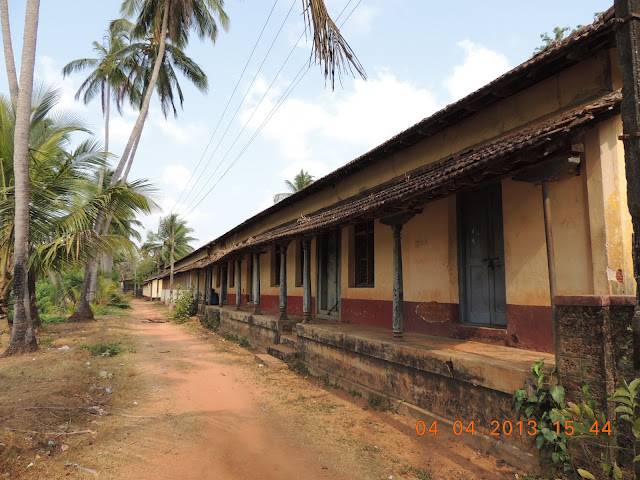 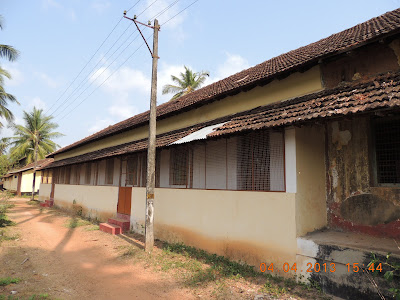 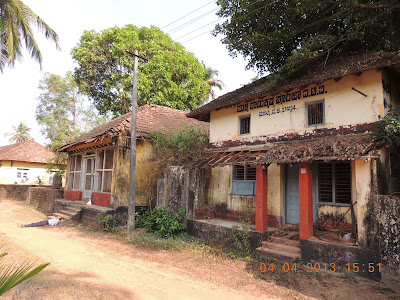 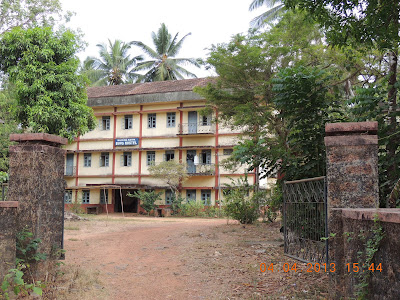 Mr Bhola treated us with tender coconut from plucked freshly from his property, Mahesh holding the same with glee.  What a pleasure it was to sip Bonda ( tender coconut ) under the ancient heritage, and by the river side enjoying the natural air conditioning under the blazing summer season. 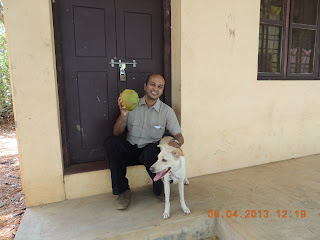 Thank you Mr Bhola for your wonder gesture and treat says Tia ( my doggie ) in acknowledgement. 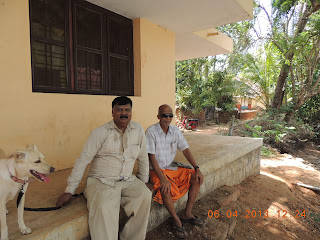 Inorder to dig deeper one has to probe further, another family with ancient lineage whom i met was Sukumar Shetty who is the proud owner of Hose Mane at the port junction.  This bunglow was built in 1905 by his great grandfather K. Shetty, whose photo adorns the enterance of the house. 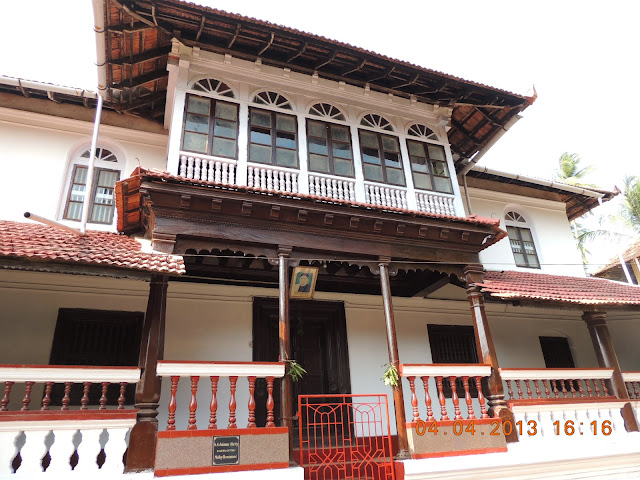 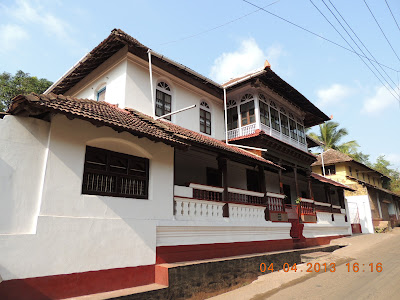 One gets an idea of the bunglow only when gets an opportunity to visit the inside of the house and dicuss the lineage and ancestary from the horses mouth, i took an appointment with Sukumar for the 6th and visited him.

This courtyard of the Kakwa Gutha family is absolute beauty in terms of construction with plenty of airy space for all the elements of nature to penetrate the living area.   In fact sometime huge family gatherings take place in this very courtyard. 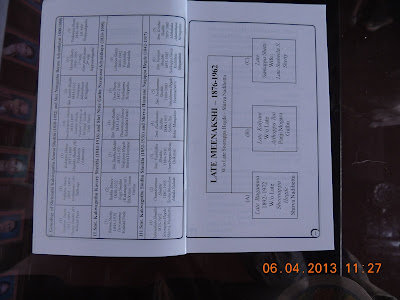 Mr Sukumar provided us the lineage of his family which is in the form of printed booklet.  Mr A.B. Shetty the founder of Vijaya Bank too belongs to his family.  A monument has been constructed in his honour opposite to the Bappanadu temple. 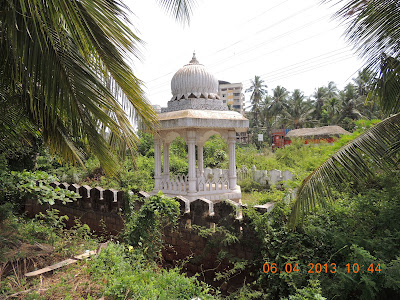 This monument in honour A.B Shetty might get relocated in the road widening of the national highway 66.  It is located besides the Bappa beary mausolem along with his family members opp Bappanadu temple. 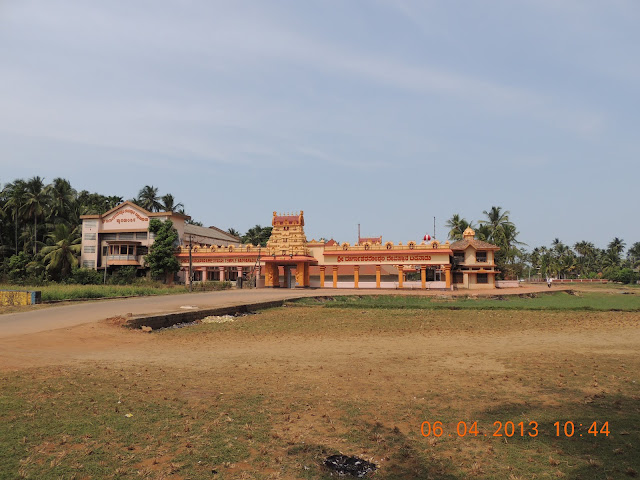 Mr Sukumar Shetty and their family have been associated with Bappanadu temple, and recently the jatra concluded on the 3rd morning.   Their family members have been in the committee and managing the affairs of the temple day to day running from generations.   The temple has undergone renovation for the third time, and it was probably spared the destruction from the forces of Tipu Sultan in 1784 probably because of its Islamic lineage.  Bappa beary was instruemental in its construction.  The fabled story that he did it in honour of the goddess Durgaparameswari, which rescued his ship from drowning still rings in its history. 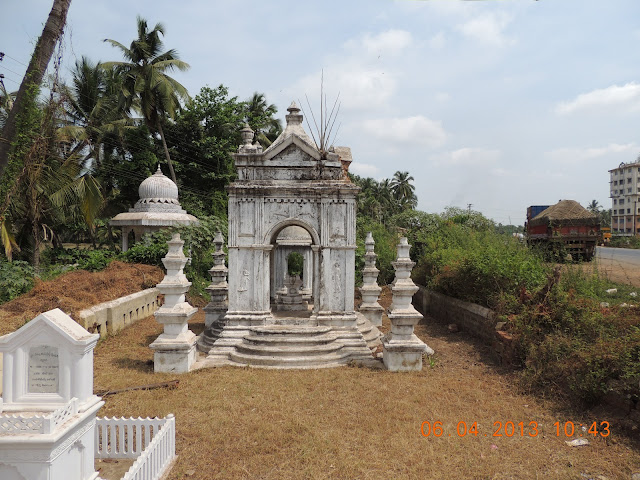 Mr Sukumar was kind enough to sketch us the family history and ancestary with reference to Mulki township.  Originally they belonged to Kakwa village which is interior stretching along the Sambhavi river banks.  They were mainly agriculturist, and originally belong to Jain heritage too.   He worked for Vijaya Bank and retired in 2007 and got possession of the place from a Bombay owner, who was finding it hard to maintain the collapsing structure.  Mr Sukumar has spent more than 10 lakhs in renovating Hosa Mane and getting it back to shape.  He is now a proud owner of a heritage building which is priceless in modern day parlance. 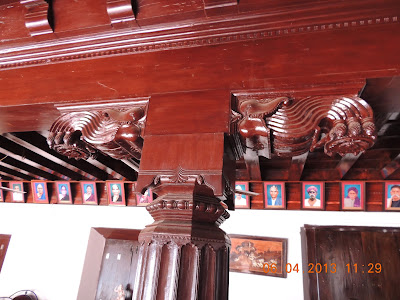 The interior of this ancient building is well maintained with some artefacts purchased from the market place such as telephone and olden day clock.   The beams and decorative pillars carved out of rosewood adds strength to the edifice.   The verandah is the highlight of the entire structure along with the entrance facade which is freshly painted and varnished. 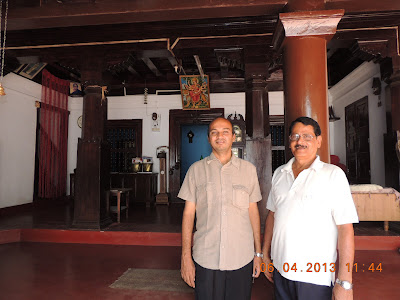 The family follows the matrilineal tradition, wherein the property rights are transferred to the grandson or daughter.   This has its own complications in terms of claiming the ownership of property many a times ending in property disputes. 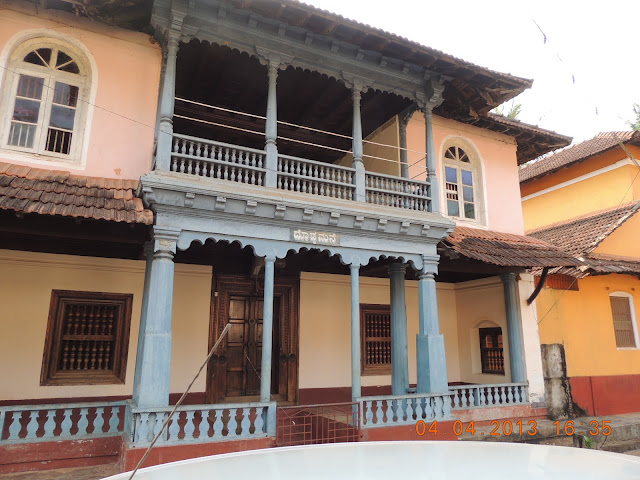 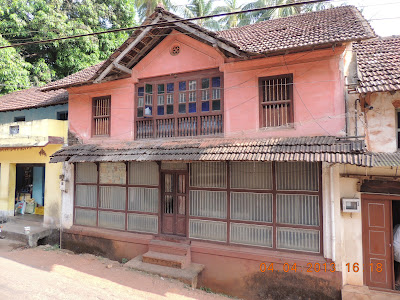 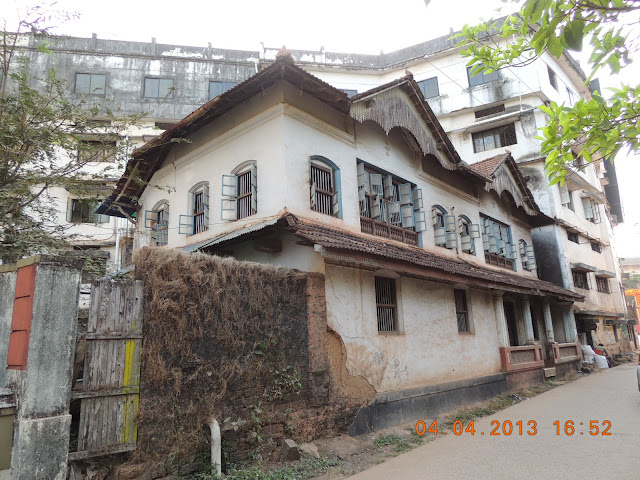 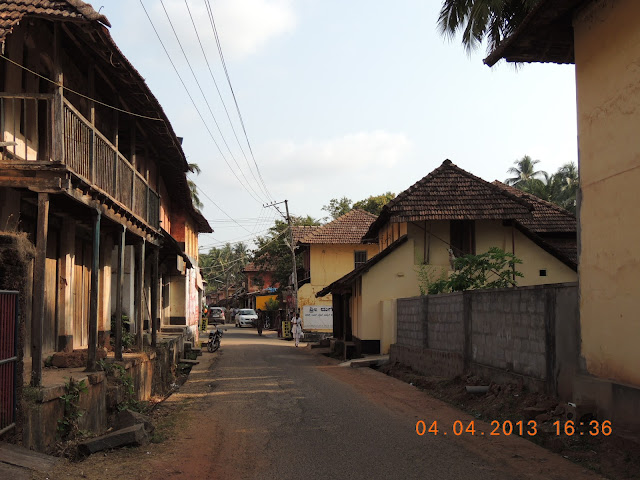 The Mulki town or port was bustling with activity, during the 1930 to 1960 when passenger steamers used to arrive on its shores.  Further people used the launch or ferry service to cross the river Sambhavi to Udupi district.   After Mangalore and Udupi, Mulki was the hub of activity.   After the construction of the bridge Mulki slowly started loosing its primacy despite having Municipal office, BSNL office, Tourist Bunglow, Panchayat, Gandhi Maidan, etc to its credential.   Ideally it should have been a district with Pavanje to Padubidri as its boundary, but politicians will have their own whims and fancies to play upon.   But for residents of Mulki it will always be a blessing in disguise because they are far away from madding crowd.   As Mr Bola surmised, simple living and high thinking.   The land is blessed with plenty of ground water and plenty of natural surroundings.

Excellent post about a less explored place, its buildings and people.

Looks like a west coast blast . Nice to know about Mulki .

Having lived in the out house of Dodmane for 12 years, I have fond memories to cherish. The owner late Mr. Rathnakara shetty would regale me with many anecdotes. People crossing the house would stop and bow their head in reverence and proceed. One of the land lords, Mr. Shetty told me, tamed a tiger. Abot the last where Aloka Printers is situated is BANGLAKARS home ,the home of Varada RAj Kamath. Gandhiji according to his father,(who was my good friend) stayed in their home during his visit of DK in one of his yathras to our district. A very good article.

Nice article about Bola family and Mulki. There is also one more house named Dodda mane on the Goldsmith street who r founded Venkatramana temple. One correction, the word Bola refers to a village called Bola in Karkal Taluk, from where this came from. Not Bhola (innocent) as mentioned in the article. Kindly correct.

Nice article on Mulki and its heritage. You have missed one more house by the name Dodda Mane on Goldsmith street. Also Bola means a village in karkal Taluk from where this Bola Madhavrao family comes from.

This house belongs to my maternal grand father. This house construction started in 1927, not 1860 ! My grand father died , i think in 1929 before the construction was finished ! My 6 uncles lived in that house. In 1960's, the property was divided. My eldest uncle, Bola Ananth Rao got this house and the grounds around this house. Other properties in bunder was allotted to other sons. Bola Ranga Rao, who is the son of my 4th uncle, Bola Narayan Rao, who is staying there now taking care of the family deity! House was not built in 1860!

Thanks for the article..took me down the memory lane...I stayed in the boys hostel from '83-84. Surprising that the place looks just the same even in 2013...

I remember this family since my Mothers is related to this family, she was from Udupi Baliga family, this bola Family had a member who used to worl for the TATA's at Mulund mumbai, Pundalik Rao, No idea where he is now, Yes i had been a regular visitor to Mulki, and nice to know about the Great Homes which are neglected as of now

I belong to the Bangar Sheshagiri family on father's side and Bombay Gopal family from my mother's side both of whom lived in Mulky and Karnad respectively. I am saddened to see the state of Mulky which was once the hub of activities in the past. It seems bullion trading used to happen in the 19th century at Mulky port (gold, silver etc). One day we will restore this famous town back to its old glory. I have already written articles about the unique Bappanadu temple built by a Muslim and the Venkataramana Temple which is known for miracles.