Majority of the north indian tourist destinations are challenging in terms of logistics, climate, food habits and cost factor. Rajasthan is no exception in terms of exploiting tourists to the core. One has to be meticulous to book their stay and bargain at each and every step of their way whether be it shopping or hiring a cab or auto for sight seeing.
Considering that we visited Jodhpur during peak of winter which is also known as blue city because of hues of blue painted houses around Meherangadh Fort, we had to carry thermal clothing, jacket and muffler to prevent being frozen. Additionally we had booked nearly 4 months in advance and still managed to get only RAC seating in the train for travelling and our stay was booked in the AC retiring room, which was not required actually but for safety and obtaining 24x7 hot water with geyser we went for AC room wherein blankets were provided.
Rajasthan is very dusty and one needs to keep their nostrils covered most of the times if one is travelling around. Luckily the city traffic is sparse unlike metros one does get to commute quicker than one thinks. Most of the tourist prefer tuk tuk because they are budget friendly. In Jodhpur railway station one does have a pre paid auto wherein the cops collect all the money in advance with a receipt and at the end of the trip one needs to handover the same to the auto driver. Depending on the number passengers sometimes the rate is fixed. Taxis too are available in the station.

Inorder to be sure shot that we do not miss out on important tourist locales I had earlier been in touch with couchsurfing guys.  Luckily I was given to understand that there are only 4 important spots to cover in Jodhpur which was Meherangarh Fortress, Umaid Bhavan Palace, Mondore Garden & Palace, Jaswant Thada and finally Ghanta Ghar.  We managed to cover additional places by literally walk through from bus stand to High Court, which seemed to be a palace earlier, govt. museum which is well stocked, shiva temple, Umaid Gardens and ultimately to Ganta ghar.
Guides are thronging in most of the tourist destinations, one does have the benefit of hiring an audio guide. Couples are found sharing the earpiece one string each in most cases. But if one keenly obseves most of the important landmarks or tourist interests are marked with numbers. 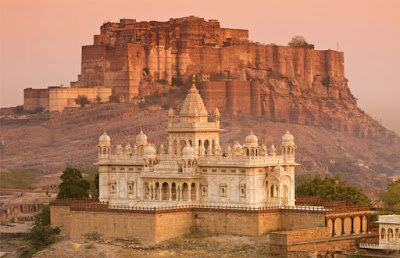 Meherangarh Fortress : One of the largest fort in India is credited to be built by Rao Jodha the founder of Jodhpur in 1459 AD. It spreads over 5 kms on a hillock which is located around 9 kms away from the railway station or Old Mandore Fortress. The larger part of fortress seems to have been completed by Jaswant Singh Marwar ( 1638- 78 ).
The fortress is dedicated to sun diety which has been the traditional diety of the Rathore Dynasty. The fortress has a series of seven gateways of which Jai Pol, Fateh Pol, Dedh Kamgra Pol and Loha Pol are prominent.
Currently fortress houses a museum filled with collections from the Royal dynasty, one needs to purchase entry ticket @ Rs 60 per pax and camera fee. The enroachment around the palace has been cleared due to the intervention of the court to maintain the sanctity or heritage. Whereas Jaislmer palace is filled with occupants.

The visitors get to see plenty of Rajasthani traditional paintings on the facade of the palace, display of Royalty costumes, Musical instruements, Furnitures, Cradles, Howdah, Palanquin, and day to day vessels and collections of clock, hookah and other antiques.
A collection of cannons is seen on the ramparts of the fortress which is currently being secured and out of bound for tourists. Beyond that spot is a Shiv mandir which needs a half km trek. A seperate enclosure is created for turbans which was closed before time when we wanted to visit the same.

If one does find paucity of time one can skip visiting the museum for which the entry ticket is required and scan the rest of the fortress within 30 minutes and scoot. Inside the palace one needs 1 hour to browse all the collections liesurely and snap them up.

Mandore Fort & Garden : Mandore is basically a fortress with boundary walls strectching across the hillock. It was the ancient capital of Marwar. It was ruled by Nahar Rao Panwar in the 6th century. Later this territory was gifted in the form of dowry to Rathore Clan when their prince married Mandori Princess in 1395. Mandore remained the capital till 1459 AD when it was felt the safety was not suffice in terms of defence being on ground level. The capital was shifted to Meherangarh fort.

Ravan Temple : A temple dedicated to Ravan is built and he is considered to be son in law of this place since he married Mandodari a princess from this region. Even till this day Ravan's dummy is not burnt as a mark of respect during the Dusherra festivity.
There are many Cenotaphs or Chattris built for the royalty who died either in war or due to illness or poisoning. The practise of sati too was prevalent during the ancient times with many of the royal ladies giving up their lives after the death of their husband in the battle.
The garden premises houses a museum which is ticketed. Otherwise the entire fortress is open for the public without any fees or ticket which is welcome sign.

A hall of hereos too built to commemorate the sacrifice of the various warriors who laid down their lives in the battle at various times. Next to the rock face we find a Kali temple which is dedicated to various dieties.
Umaid Bhawan Palace : The palace was primarily built by Maharaja Umaid Singh to provide employment to people affected by famine. The construction of this palace began in 1929 and was completed in 1943. It earned a legacy of being one of the largest private residence in the world with 347 rooms. 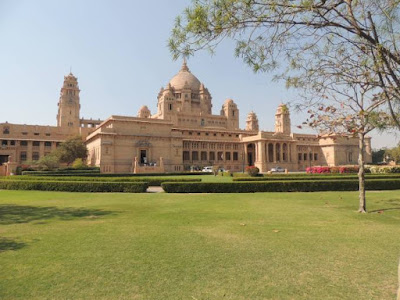 Currently it houses a museum, a heritage hotel of Taj group and private residence of Gaj Singh. Tourists are allowed to visit the museum portion whereas other portions are the palace has been barricaded to protect residents of private property. There is a collection of Rolls Royce, Mercedes and other antique automobiles from the 18th and 19th century in a seperate enclosure located at the edge of the garden. From this place one can get the finest view of the entire palace.
The main architect of the Umaid Bhavan was Henry Vaughan Lanchester who drew inspiration from his contemporary Sir Edwin Lutyens who planned New Delhi government complex. Thus the palace was a blend of domes and columns with western technology and Indian architecture.

The site chose was known as Chittar Hill on the outskirts of Jodhpur, where water supply was scarce with rocky and hilly surface. The Maharaja ensured a railway line was built to quarry stone and other building material to the site. The sandstone were dressed at the site on interlocking technique to ensure that no mortar was used in construction. Golden Hued sandstone was used to build two wings of the palace. Makrana Marble and Burmese Teak were used for the interior flooring and door frames.
The palace consists of a darbar hall, banquet hall and long passages with bedrooms and private rooms for the staff and royalty. It also contains swimming pool, pvt tennis courts, squash courts, a ball room and a library. Taj palace consists of 70 bedrooms and huge landscaped gardens.

Museum is adorned with huge fresco paintings, collection of wall clocks, paintings of royalty, furnitures, household items in porcelain etc. Stuffed leopard is also part of the collection which seems to have been gifted by Queen Victoria in 1877.
The palace seems to have invited curse of a saint who seems to have been evicted from this place like in Meherangarh fortress. Umaid singh occupied the palace only for four years after which he died in 1947. His successor Hanumanth Singh died in an air crash after winning a general election 1952. It was under Gaj Singh who took a decision to lease out a portion of the property to Taj to ensure income and maintainence of the property.  The palace is divided into 3 sections consisting of Taj Palace Hotel, Museum and private residence of the royalty. 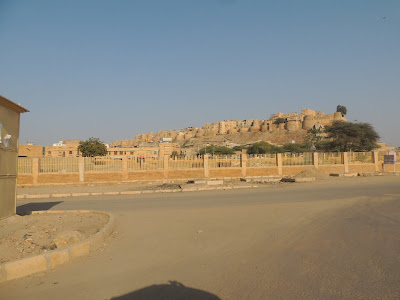 JAISALMER :  Considering the logistics of carrying our luggage and moving around scouting for lodging we decided to cover Jaisalmer  up & down trip from Jodhpur, we had a convenient train at 5 am to Jaislmer which we booked in advance and return journey was at 4 pm towards Jodphur.  In between we had approx. 6 hours to spend we hired a auto who initially tricked us stating that he will cover all tourist spots with 300 bucks which we thought was reasonable.  But as it turned out he was referring to only a city circuit.  Later we had to bargain hard and he reluctantly agreed to cover the Centoph and other places in the outskirts for 600 bucks and drop us back to railway station in time to board the train.  Our first destination was Gadsisar Lake 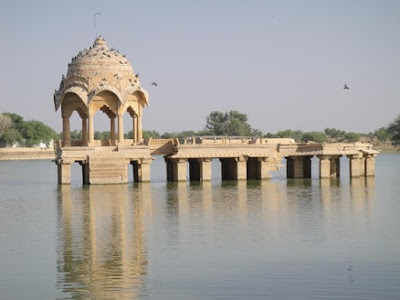 Gadsisar lake was excavated in 1367 by Raval Gadsi Singh to ensure potable drinking water to citizens of area.  A number of small shrines were erected on the boundary of the lake to ensure protection to the water body.  The lake is now being on the verge of extinction due increased demand for agriculture. 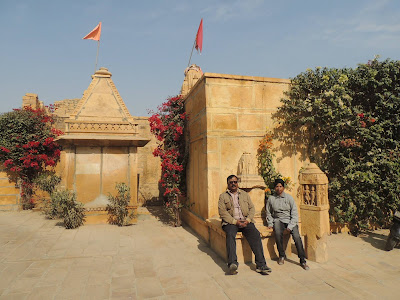 Salim Haveli :  This haveli is built on the peacock type of architecture by Salim Singh was the PM during 1815.  It was literally renovated from the previous structure which was in state of ruins.  The Mehta family occupied this premises till a trust has taken over the premise and collects entry fee from the visitors for entry as well as photography.  Haveli is filled with artefacts which have been collected over decades.  We can witness almost 38 balconies constructed in all directions with distinct style of their own.  Sometimes the haveli is called Jahazmahal which means stern of a ship because the frontal façade resembles a ship.  This place is located near Sonar Killa or the fortress. 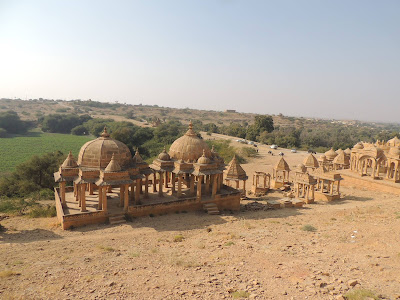